Borderlands 3 sees the introduction of a new feature into the critically acclaimed looter shooter franchises: Crew Challenges. These side quests are strewn across most planets and net you some a serious XP bonus (and occasionally rewards). In this series of guides, I’ll be showing you the locations, as well as how to access them. Please note that all of these guides contain major map spoilers.

If you’ve played any of the previous Borderlands games, (if you haven’t, I advise you stop reading and go Borderlands 2 ASAP) you’ll know that one of the most iconic characters of Gearbox’s looter shooter franchise is the beloved simpleton mechanic Scooter. Unfortunately, you might remember his untimely death in Tales From The Borderlands meaning the over the top, slightly mad mechanic is no longer.

But that doesn’t mean you have to stop catching a ride as Scooter’s sister Ellie has inherited the entire Catch A Ride franchise that scooter had built and re-branded it to now have an Ellie charm, so you can keep fighting the good fight in one of the several new vehicles in Borderlands 3.

There is a catch, however; Ellie is yet to possess certain vehicle parts that will allow you to modify your ride. Luckily, she does know the drop on some of the best rides about town, and is willing to offer a decent chunk of XP for your troubles. Want to know where to find these targets which you can borrow? Keep on reading to find out!

Pandora is home to four vehicles that are of worth to you. 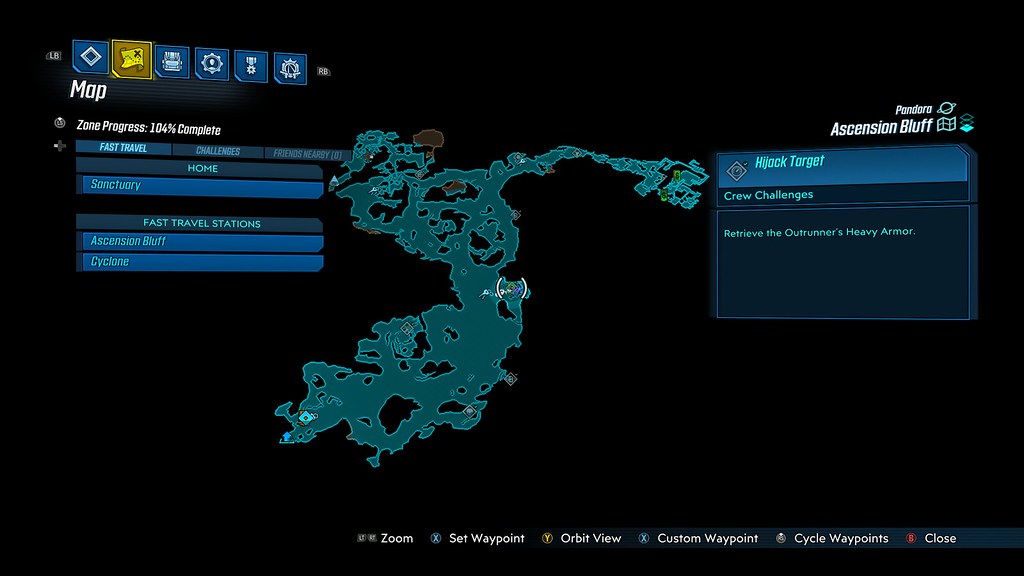 Early on in the game you’ll be able to find a compound that houses a vehicle called the ‘heavy outrunner’. Collecting this vehicle will give you access to heavy armor for the outrunner vehicle. 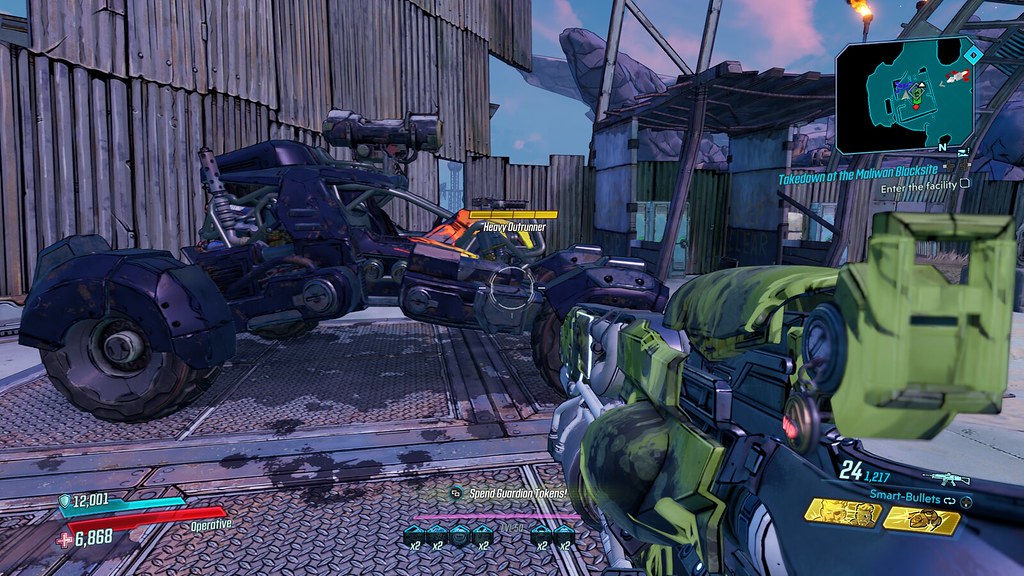 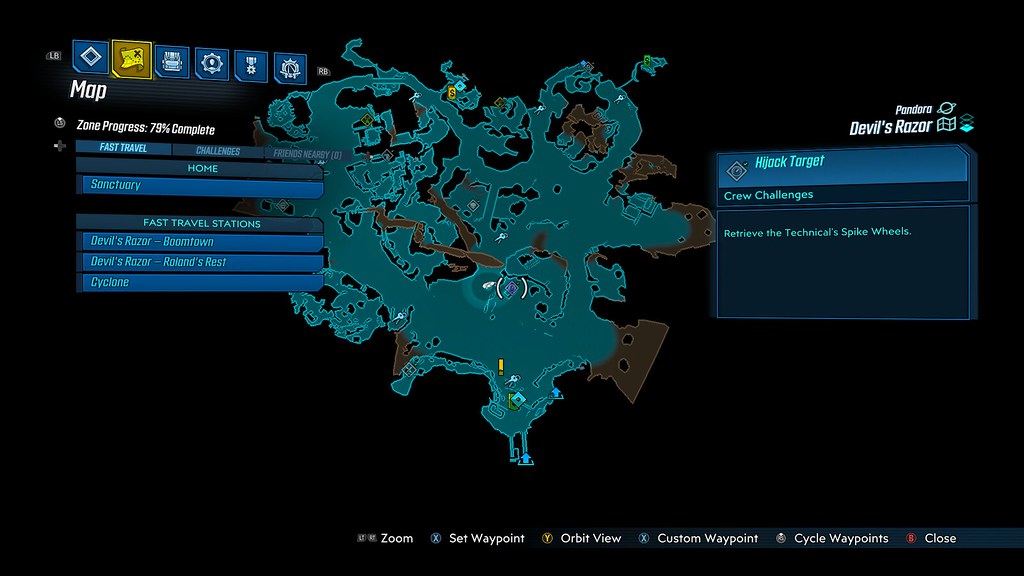 This is one of the harder ones to get to.

When you arrive at the location on the map, you’ll find that the technical sits atop a house. Head up the cliff (where the other house is) and take a run up onto the garage roof (you’ll see an ammo chest, aim for that). Once on, head right and land on the slated roof before jumping onto the crates (which include a money lockbox). Look right and you’ll see another roof above you. Once you’ve climbed ontop, the spiked technical will be dead ahead of you. 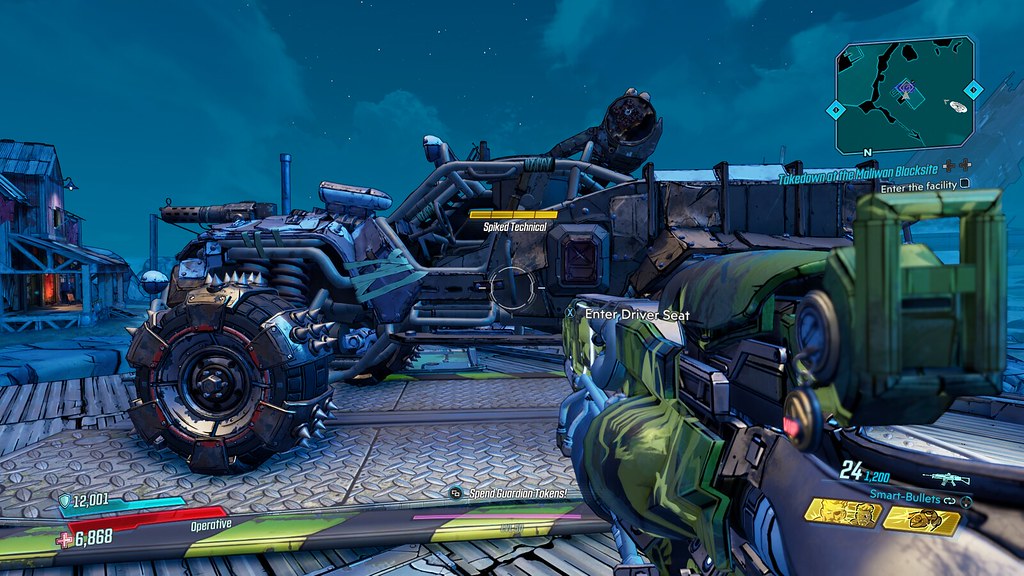 This’ll be especially useful when you’re mowing down skags, and want to put in that extra damage. 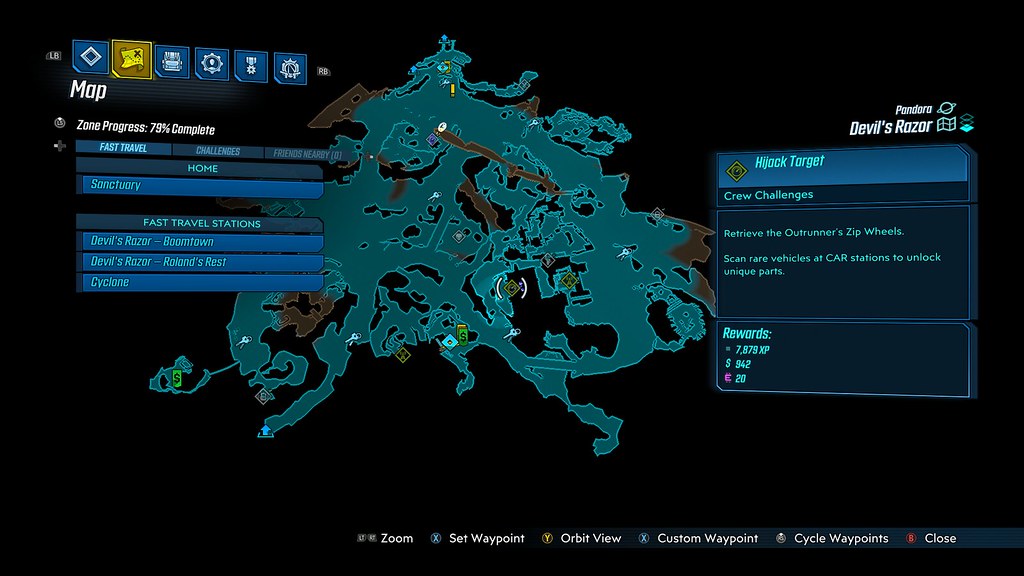 Once you find the general location of the zippy outrunner, you’ll hear Ellie get excited over it. Next, you’ll want to look for this pipe: 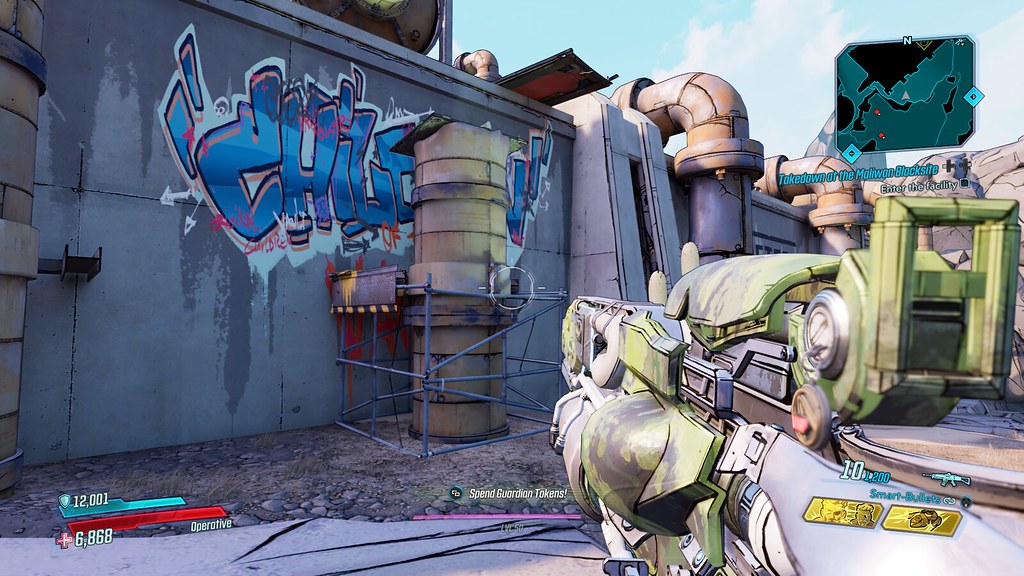 Once found, it’s as easy as climbing onto the scrap metal platforms and crouching under the pipe at the top, taking you to the zippy outrunner which can be rode to the nearest catch a ride and the bottom of the dam. 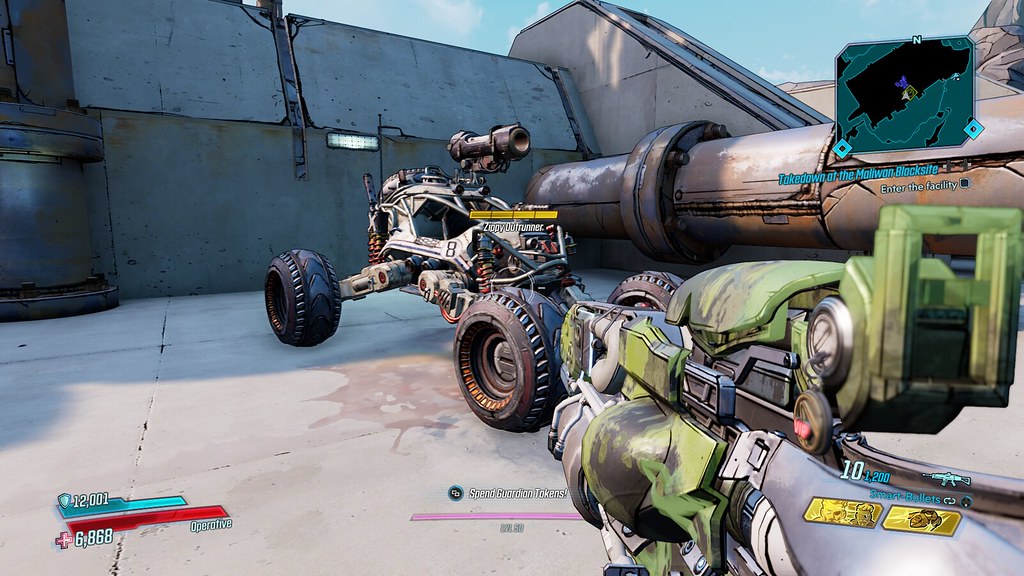 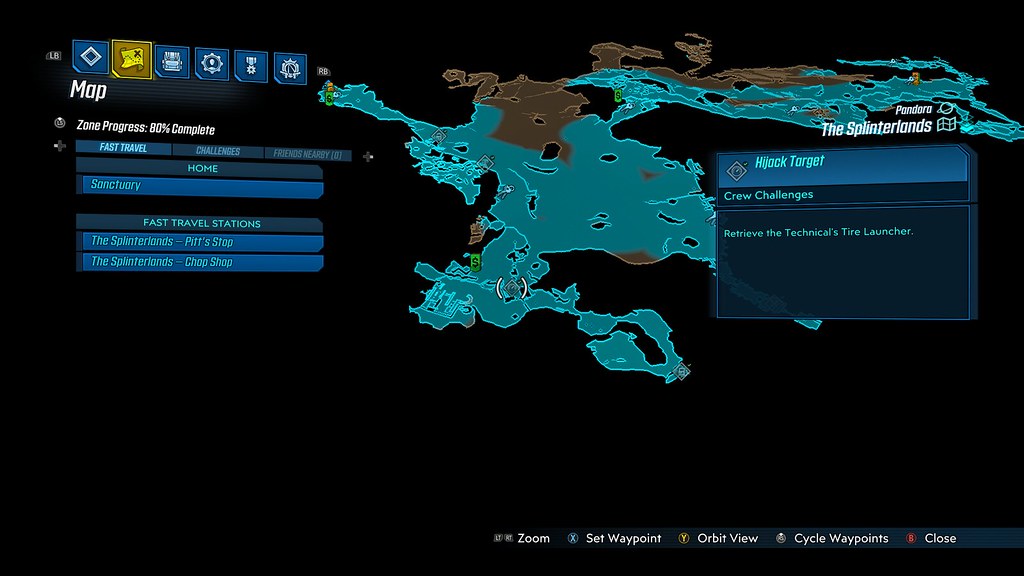 This one is easy peasy; head to the farm that and you’ll see that the vehicle is stored inside a garage which can be opened by following the yellow wire. Following the wire will take you to the top of the garage (there are many ways to get up there, but we recommend heading round back and using the old waterwheel to leverage yourself onto the top) and hit the button, opening the garage door and revealing the spare tire technical. 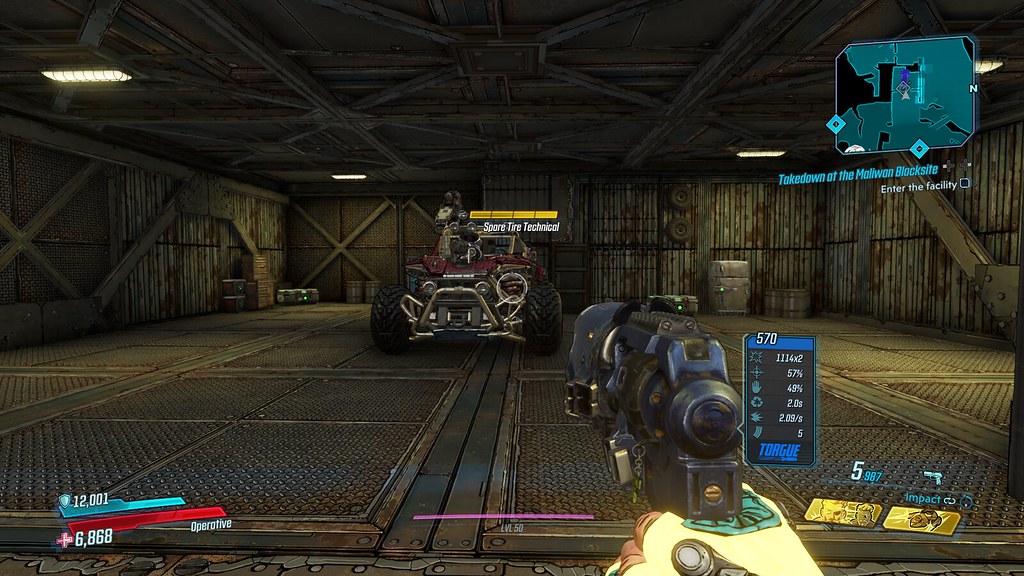 There are two hijackable vehicles on Promethea. 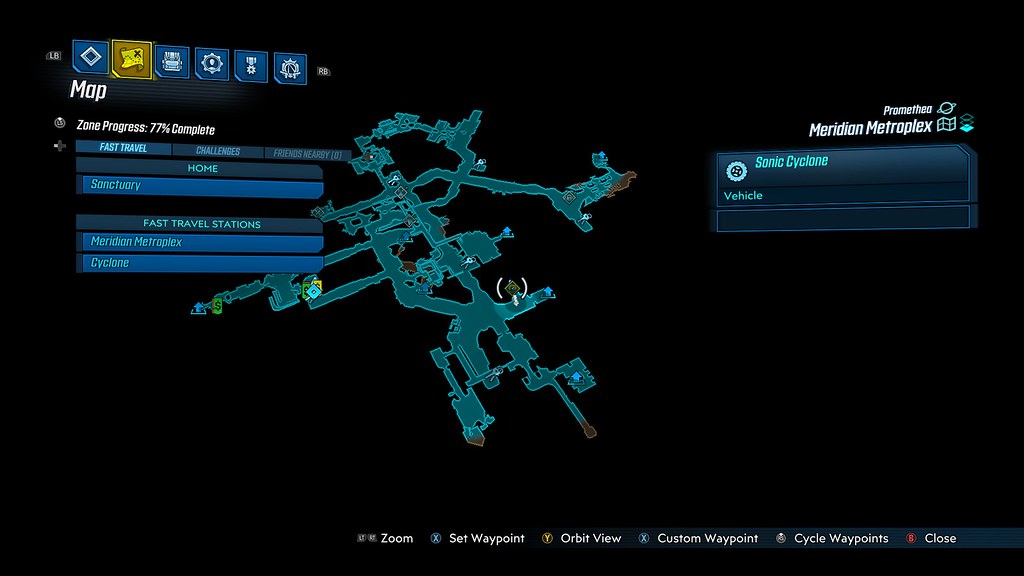 This vehicle is relatively easy to get to; you’ll notice it is stuck behind a forcefield powered by a generator which is around the corner among a pile of rublle. Follow the wire from the power box next to the forcefield and find the first disconnection in the wire which connects the box and the power generator. (it is very close to where the vehicle is). Look directly above the disconnection and you’ll notice a pipe with a bullseye on it. Aim for the bullseye and water will drop down, connecting the wire to the box. Do this for the two other disconnections and you’ll find that the forcefield depletes, giving you access to the Sonic Cyclone (a reference to Sonic due to the vehicle’s speed). 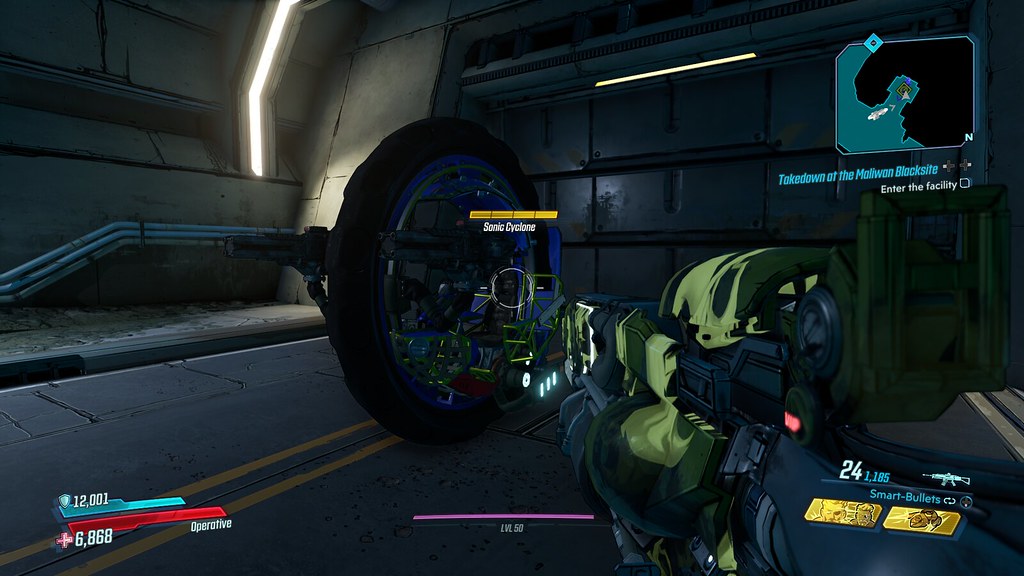 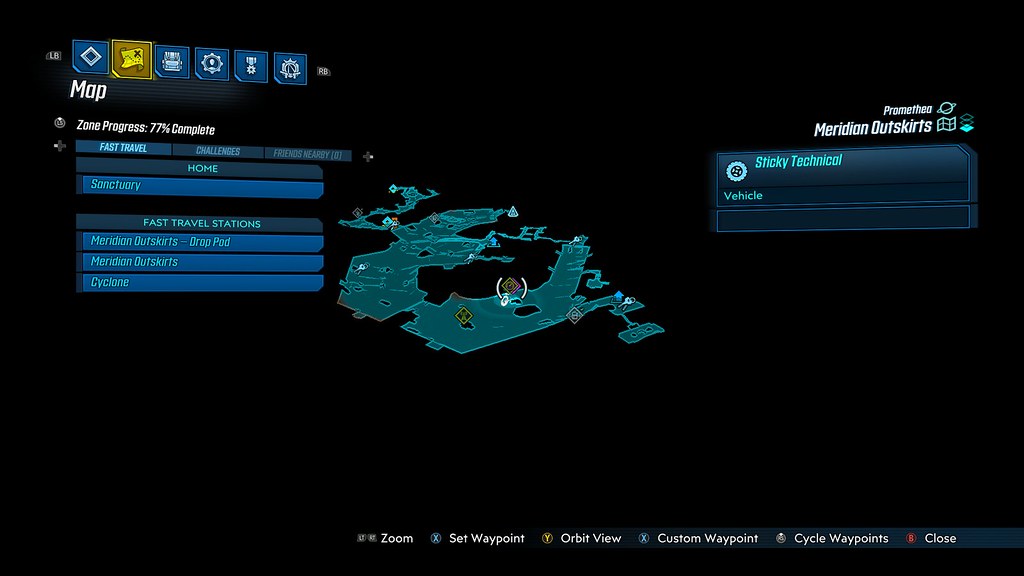 This one may took a few tries, depending on your luck and traversing skills; head on over to the marker and you’ll see that the technical sits above a hill of flimsy prefab buildings. A path is marked by yellow paint but you’ll find that you might have trouble climbing onto the building. I recommend climbing onto the first part (the scrap metal piece) and taking a runup before making it onto the building. Once you do it, you’ll be rewarded with the sticky technical. 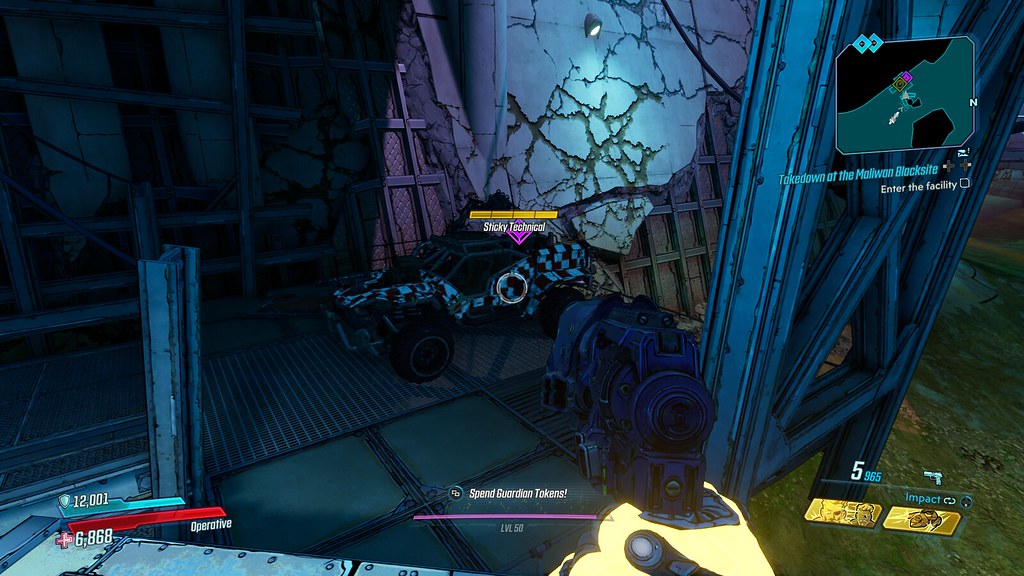 There are two hijackable vehicles on Eden-6. 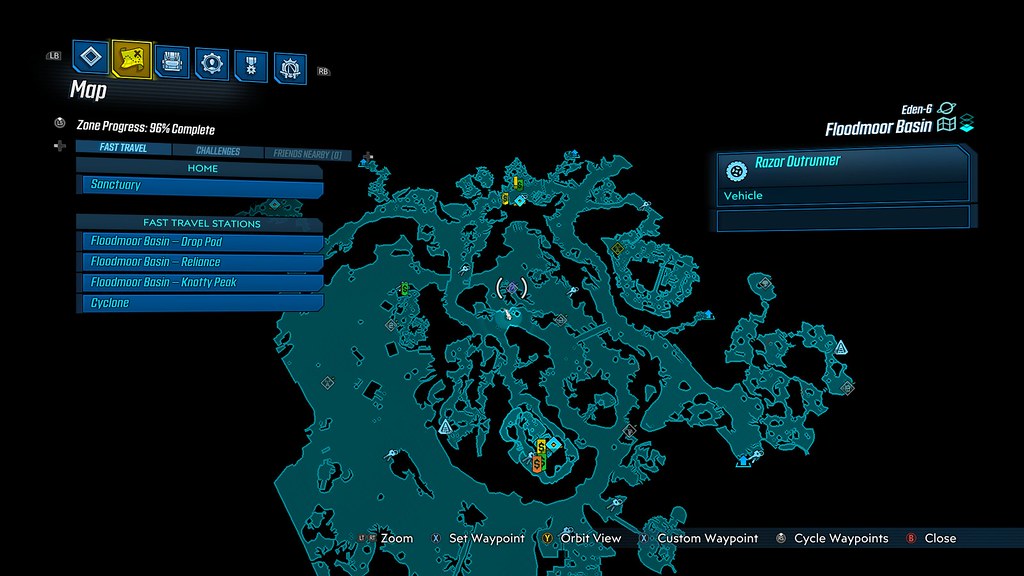 Another difficult one to get to; The razor outrunner sits next to a stilted house. The only way to access the platform is by boosting off a ramp. 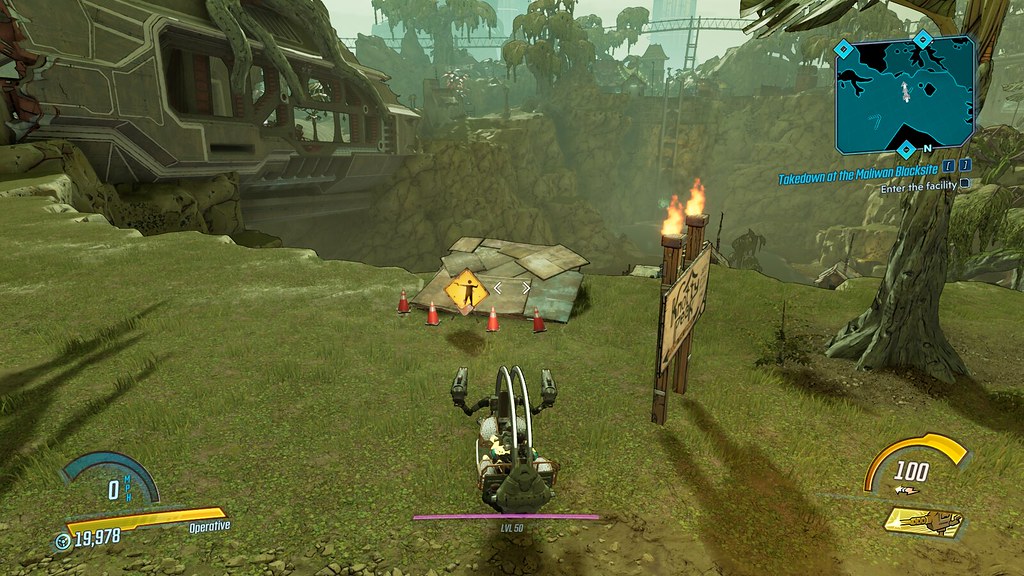 It might take a few times to land but once you do, you’ll find the razor outrunner waiting for you. Be careful however as I managed to demolish the vehicle by landing on top of it. Here’s a picture of where the vehicle would have been. 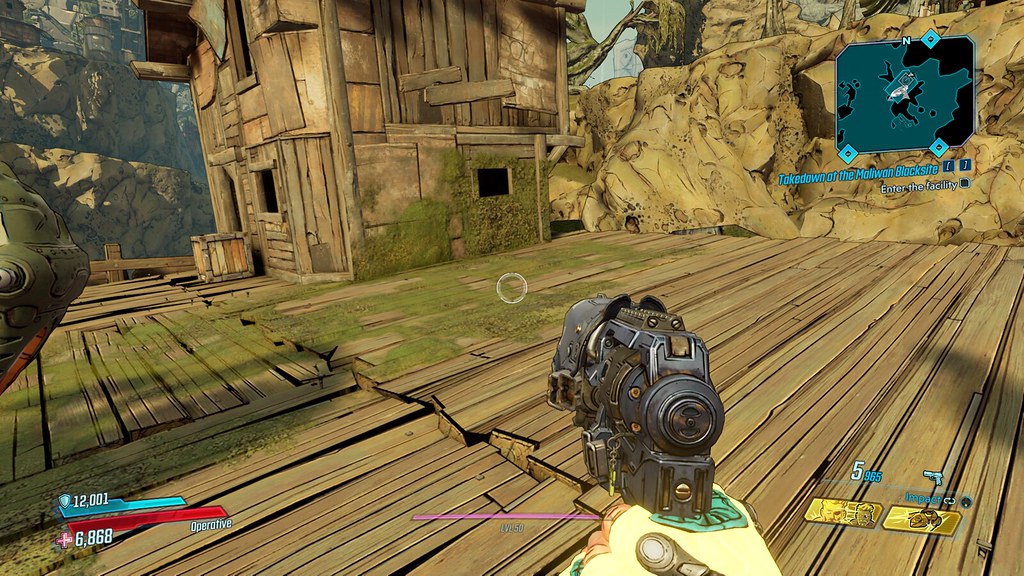 The second hijacked vehicle in Floodmoor Basin is much easier to get to and is attached to a bandit camp. 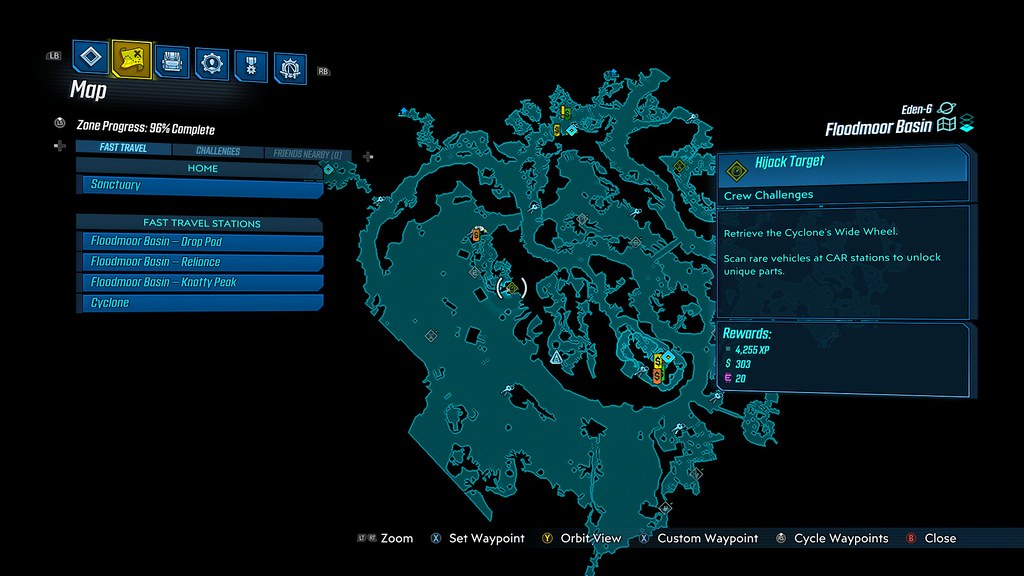 Just head on over to the marker and you’ll find the fat cyclone waiting for you. 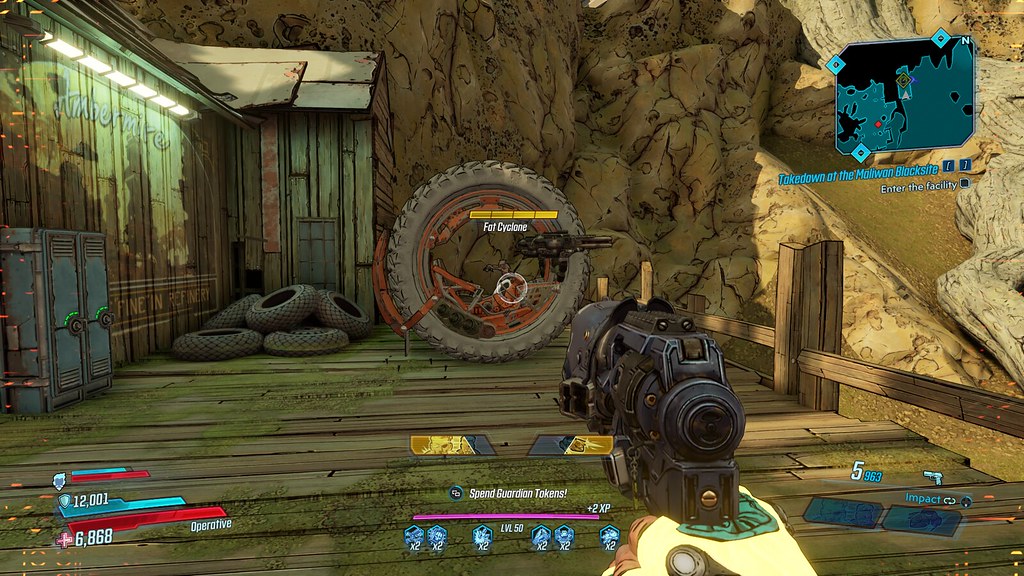 The first can be found by heading to the location on the map. 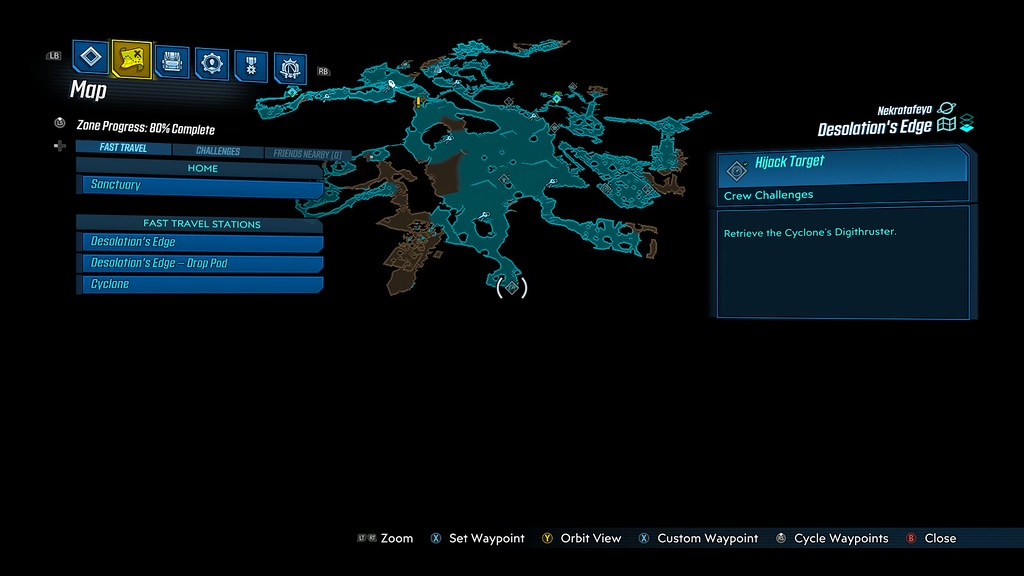 Head to the location and you’ll see the entrance is covered by red branches. Simply melee the obstruction to reveal the 6G Cyclone. 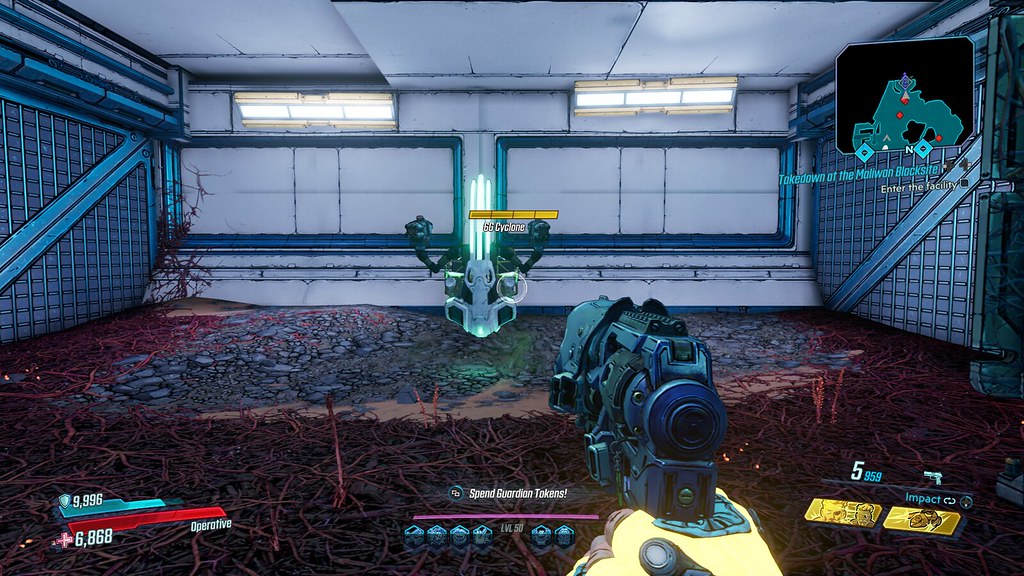 The next (and final) vehicle can be found in the Maliwan compound. 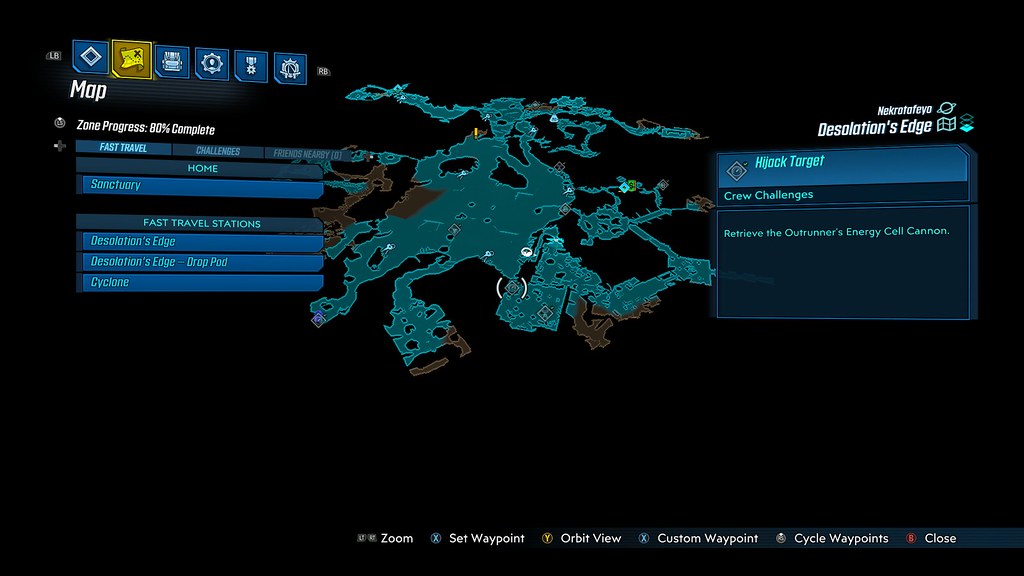 Head on over to the marker and you’ll find another forcefield; this time, follow the three wires and shoot their respective power boxes (grenades work just as well). Be quick though, as the forcefield only opens for a limited time before closing again.

Once you’re in, you’ll be greeted with the pulse outrunner. 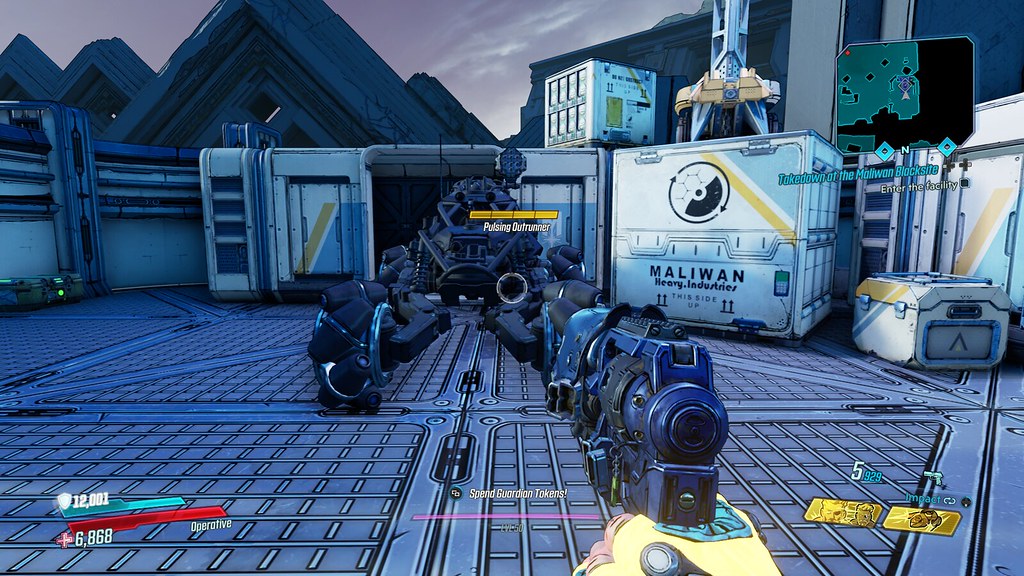 And just like that, you’ve collected all the vehicles in Borderlands 3! There are still roaming enemy vehicles that still have parts, so be sure to hijack them every once in a while to find some modifications you didn’t previously own.

If you’d like to complete more crew challenges why not check out our other guides such as where to find the crimson radio towers or where to find legendary, deformed beasts.