Luckily, CD PROJEKT (creators of critically acclaimed RPG The Witcher 3 and upcoming sci-fi epic Cyberpunk 2077) are in the process of upgrading their launcher, GOG Galaxy, to accommodate other launchers to act as a universal launcher, allowing you to access all your games from one place. It’s a novelty that makes a difference for some people (especially game collectors), but is just another launcher for others.

Currently it’s in closed beta, which means if you have signed up to test it (which you can still do by going here) you will have access to GOG Galaxy 2.0 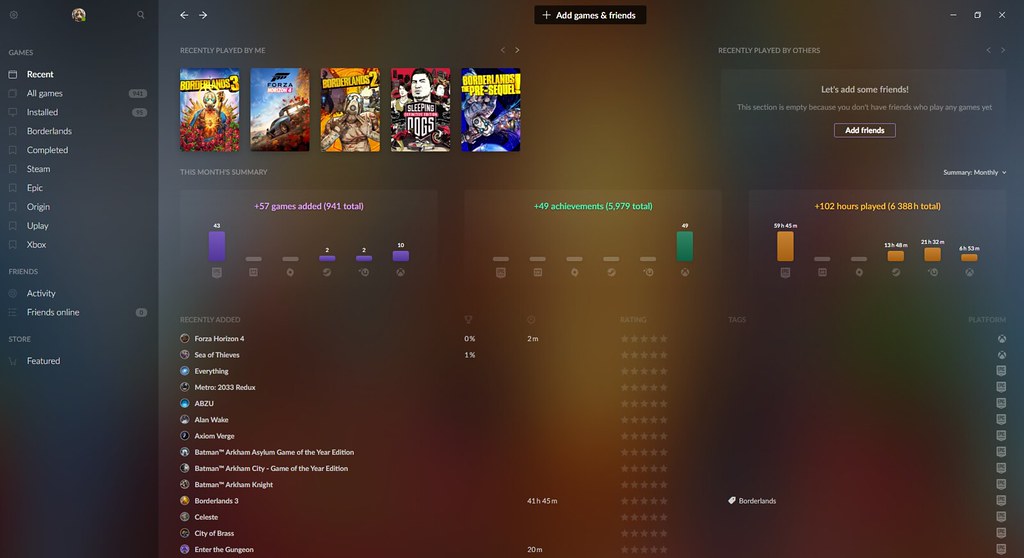 After spending some time with the launcher and testing its limits, I’d like to share my thoughts on its current state. First of all, let’s talk design; GOG have opted to stay true to their galaxy name, and have implemented colours that match the graphically appealing sight of a galaxy. A yellow, red and blue pallet encompasses the overall design of the launcher. It’s a choice that ensures the colours aren’t invading the text and images, which can be appreciated by anyone who has visited a website made before 2009. The text looks nice too, which is a bonus.

Galaxy 2.0 has the looks, but does it have the touch? Yes, it certainly does: from the get go you’re given the choice to integrate your launchers, which is a simple and painless process, provided you remember the login details to your nine year old Steam account. Alternatively, you can add games by doing a quick search, marking the game as owned, showing Galaxy where the exe file is and viola: hitting play will run the game. Once you’re all hooked up and have submitted your accounts to the launcher, Galaxy will automatically sort the games by launcher, as well as add them to your games collection.

You can edit, delete and rename these categories (called bookmarks) to your will, which makes finding that one game you forgot the name of that much easier. You can also add tags to make finding games easier, as well as giving them your own rating. It’s a pretty neat system, but tedious and time consuming for those with big libraries. Luckily, the filter option exists, allowing you to block out games that get in your way, including but not limited to the ones you accidentally picked up in a sale, or the ones you just really don’t like or maybe even the ones you promised for the 50th time you’re taking a break from!

The games themselves are presented as if they were on shelves, with a good majority of games (bar niche titles) having box cover art which for games looks good but I have noticed a few slip ups with some titles failing to fit their title into the 342×482 box. This again however mostly affects smaller, less heard of titles (aka the games you pick up in a sale). The end result of this layout is a aesthetically pleasing library of games. 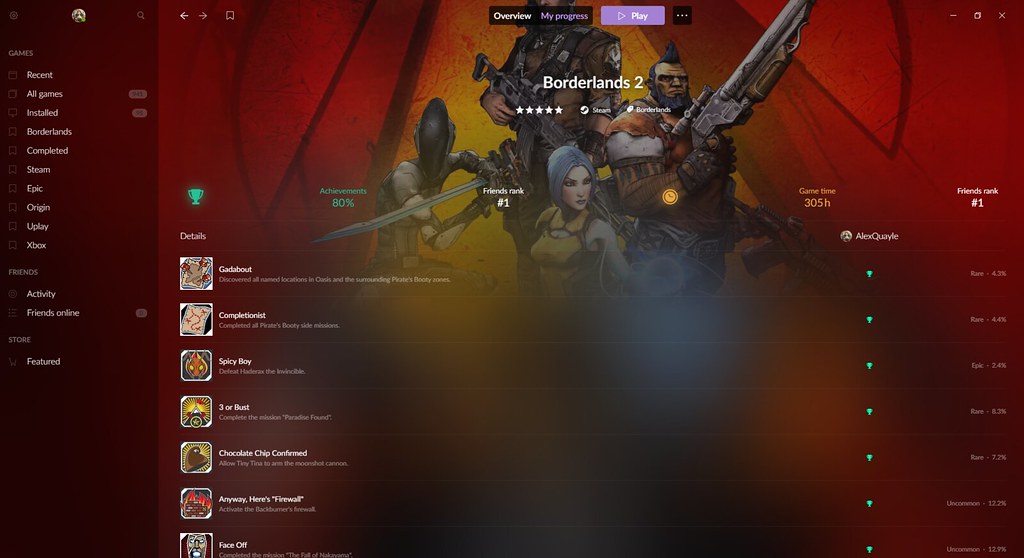 Launching games from Galaxy isn’t the only thing you can do; thanks to the recent atlas update, games now have their playtime tracked, regardless of which neck of the woods they come from. This is huge for a lot of people, including me as I like to know just how long I’ve spent farming for legendaries in Borderlands 3, or placing blocks in Minecraft. It also supports the viewing of achievements for launchers that offer trophies. For example, my Steam and Xbox achievements can be seen from the launcher, whereas Epic Games Store hasn’t implemented the feature thus there is nothing to view.

While these features are great and all, the launcher is plagued with bugs. Everything from failed integrations for no reason whatsoever to the disappearance of certain games, GOG Galaxy 2.0 is nowhere near perfect. It also isn’t a universal game launcher either, lacking features such as the option to download games through the launcher itself and cloud saves and occasionally failing to open games. You also still need to open launchers which in a way defeats part of the purpose of Galaxy.

Despite it not being a universal game launcher, it sure as hell is getting there.

I’ve got hope in the GOG team, and seeing how much the atlas update improved Galaxy and their commitment to fleshing out bugs, I have hope that someday GOG will manage to unite the launchers together, like some kind of technical Power Rangers, and make it easier for users to access their games.