You don’t have to be mad to work here, but it helps. 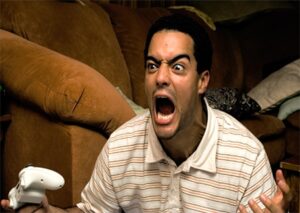 For the longest time now Stress has been a key negative aspect in the public’s eye. It is not uncommon to hear someone express out loud how “stressful” they find their current life, job, or competitive endeavor. In this regard, the world of e-sports is no different, I myself can remember vividly conceptualizing experiences of both winning and losing as “stressful”. But what really do we mean when we describe something as stressful, has the word become so overused that it has muddied the waters to the point where it has lost its purpose? This article will explore both the science behind stress, within e-sports, and also the various coping mechanics that athletes can employ to help buffer against this maladaptive psychological outcome.

So let’s start with the big ones, wtf is stress? Given that there are whole books devoted to this topic, I’ll attempt to keep it brief. Fundamentally we can consider stress to be a state when the athlete has decided that the demands being placed upon them, by stressors, is greater than their ability to apply coping resources. We can think of stressors themselves as being environmental demands being perceived by the individual. The important thing to note here, at the very beginning is that the stressors are what is perceived by an individual, rather than is what exactly exists. Recently while watching a Starcraft stream I saw the streamer go against an opponent who was ranked significantly lower than she was. The opponent then made a joking comment about how she should destroy one of her starting units because of the rating gap. This is a perfect example where that opponent has already decided they can’t win, the gap in skill, as denoted by their ratings, is too much of a stressor. However, what’s to say the person they were playing hadn’t been boosted there or bought their account. The rating system in games, where we see ranks, leagues, etc are simply the computer’s decision, and are often not a fair representation of skill. This here is an example of the first, and arguably “best” type of coping, problem-focused coping (PFC). Here the athlete will focus on the problem and either challenge the perceived stressor “their rating isn’t that far from mine”, or given enough time they might practice to decrease the perceived skill difference.

So we know about the first type of coping, PFC, but what about the rest and are they any good? Well the second, is emotional-focused coping, which as you might have guessed involves the individual expressing their emotions based on a stressor. This can be quite a positive or adaptive technique, a quick burst of emotion privately and then you go on. However, the devil is in the details and emotionally coping by lobbing your mouse across the room…yeh… So there is a time and a place for it, and the same can be said of the final method of coping, that being Avoidance Coping.

Avoidance coping has got a bad rap in the past, but personally I think that it has a place in esports. However, it needs to be used appropriately and sparingly. I find that it is best employed when a stressor appears very close to performance time. That meaning, if a stressor appears mid-game, and you find yourself loosing 3 rounds in a row in COD, then you can push that to the back of your mind, and focus on the current round you are playing. This is, opposed to the PFC where you may want to look back at the specific moments in those rounds where improvement is possible. This PFC could be applied during a time out, for example, however, during the rounds itself, it may be better to focus on that specific round rather than ruminate about previous ones.

This final example, encompassing multiple coping methods within a single performance, leads us nicely on to the real goal here. That being, that as athletes you will need to develop a sense and skill set to appraise the stressors and apply appropriate coping where possible. Your personalities and play styles will naturally influence this, but hopefully, you feel better equipped to explore the possibilities of coping strategies. While always bearing in mind that it is your perceptions that make stress, and those perceptions can be challenged.